« What would you do if someone offered you unlimited power? Would you take it?
And more importantly, what price would you pay to keep it?
The Bane’s power is little more than a legend in the land of Calest, one known by many but believed by few. But with a rival country now threatening to invade and once-peaceful dragons attacking their cities, a fairytale may be their only option.
Lena Maye wants no part in finding the Bane. She’s seen firsthand how it corrupted her own country, and only wants to be reunited with her father. But in order to find him, she must join forces with the distrusting and arrogant Blaze Montego…who needs her help to find the Bane.
With tensions rising on all sides and secrets slipping that could change everything they know about the world, can they find a way to work together and save Calest without being corrupted by the very force they’re fighting against? »

Thank you very much to the author, Melody Jackson, for giving me a free copy of her ebook for review! 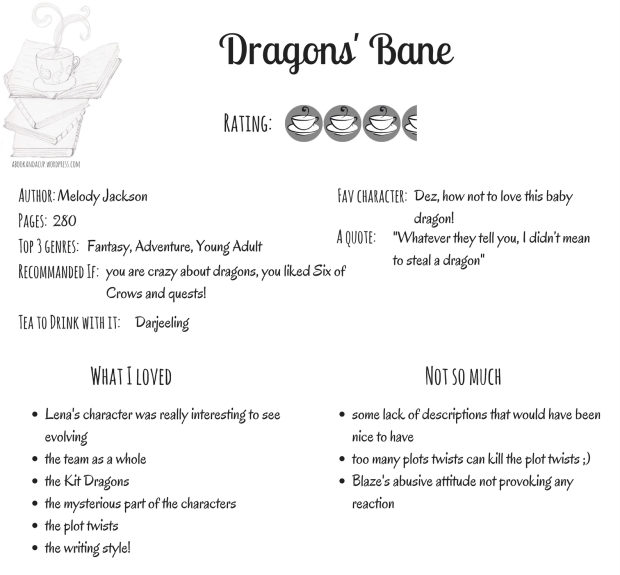 « Whatever they tell you, I didn’t mean to steal a dragon » When a book starts like that … how not to be intrigued right? well, I was not disappointed by what came after! Melody Jackson offers us a world of Dragons and magic, endangered by a mysterious Empress.. but also a strange magical force.

We follow Lena, one of the main character, on her quest to rejoin with her father. A quest that does not start well as she is captured after stealing a dragon… but why would she do that? Something you’ll discover during her captivity, as she will discover more than she was expecting about who she is, and who her captors are. And she might have to work with this odd team to get her freedom (and father) back!

The first thing I thought about this book was that on some aspects it reminded me of Six of Crows, what I loved in Six of Crows to be more precise: the quest, the changing narrator and mostly, this strange and broken team having to do the impossible. It was very entertaining to follow all of them and their interactions! We follow Lena, one of the main character, on her quest to rejoin with her father. A quest that does not start well as she is captured after stealing a dragon… but why would she do that?

The dragon part was very interesting too, and I want even more of them! I think there is a lot to discover on the dragons of this world! Messengers, rides, monsters, they have a lot of roles to play!

I also loved that at some point I didn’t know who to believe anymore. Often, you have a clue, you can guess. Not here. I was not sure until it was revealed. And feeling unstable like that … it was a nice surprise! Plot twists were numerous in this book, almost overwhelming sometimes, but always adding to the complexity of this work.

I encountered some issues with this book too; first, I had a bit of a problem with the abusive attitude of Blaze and the way it was brushed off by the others. I know that you have to adapt your characters to the way you imagine their world is, but it would have been nice to have someone in the story reflect on that. Some parts were

To conclude this little review, I’d say that the beginning was great before a little lost of speed around the middle but the end was full of surprises and revelations, til the very last page!
Some parts were lacking descriptions, and some shortcuts were made, but for a beginning author, this was really good. Fluid and dynamic writing style, lots of original ideas (like the narrator changes, and all the reveals), and a promising story!

Let me know if you’ve read this book or would like to read it!

See you for another cup!

If you want to get this book for yourself (ebook or physical copy): http://amzn.to/2qWsT5g