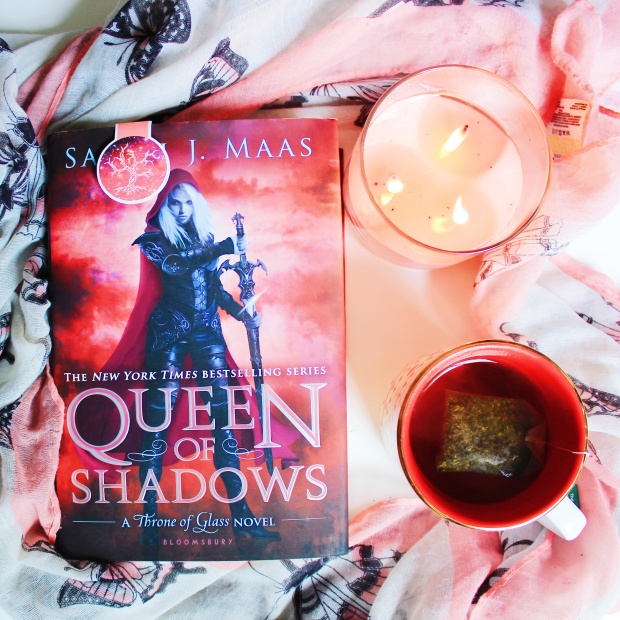 Everyone Celaena Sardothien loves has been taken from her. But she’s at last returned to the empire—for vengeance, to rescue her once-glorious kingdom, and to confront the shadows of her past…

She has embraced her identity as Aelin Galathynius, Queen of Terrasen. But before she can reclaim her throne, she must fight.

The fourth volume in the New York Times bestselling series continues Celaena’s epic journey and builds to a passionate, agonizing crescendo that might just shatter her world.

Aelin is back in Adarlan, ready to take down the King, and free magic. In this book, she goes from one task to another, never resting, to reach her goal.. and destiny. Around her, a team is slowly forming, with characters we know from the beginning but also new ones. And together, they try to fight the evil in the kingdom, discovering on their way old and burried secrets.

This adventurous part if I can call it that way was always as pleasant as usual with Maas. Her writing makes it living and you always want to read the next chapter. She is also pretty good when it comes to different POV. She already did it in her past books, and here again, she did not fail! I particularly enjoyed the parts with Manon and Elide, but also Kaitlin, who everybody underestimated. Yes, Maas really has a talent for her second roles!

Now, my problem with this book was with the main characters, especially Aelin and Chaol. Aelin was childish and fangirling all over Rowan (I understand crazy love but this was not that, this was something that made you want to shake her to her senses) and Chaol was being stubborn when Aelin was involved. This at least, I can understand. It was a way for his character to come to an understanding, to move on. But Aelin. Nope, there was no reason for how she acted. In some part of the book, I just wanted to skip the page, I could not bare it. this is why I rated this book a bit less than the others in the series. I truly hope the next one will be better on that part because other than that, Maas stays one of my favorite guilty pleasure author 😉

Something else I noticed, tell me if it’s just me: how close some of it is to ACOTAR. Aedion and Rhysand for example. Their characters even share the « whore » nickname! Some quotes are also very similar: « She was Aelin Fireheart, and she bowed for no one and nothing, save the crown that was hers by blood and survival and triumph. » Does it ring a bell? Or when she is called Death incarnate? That was a bit upsetting for me. That she re-used such similar words or character traits from one series to another.

Have you read it? what did you think?