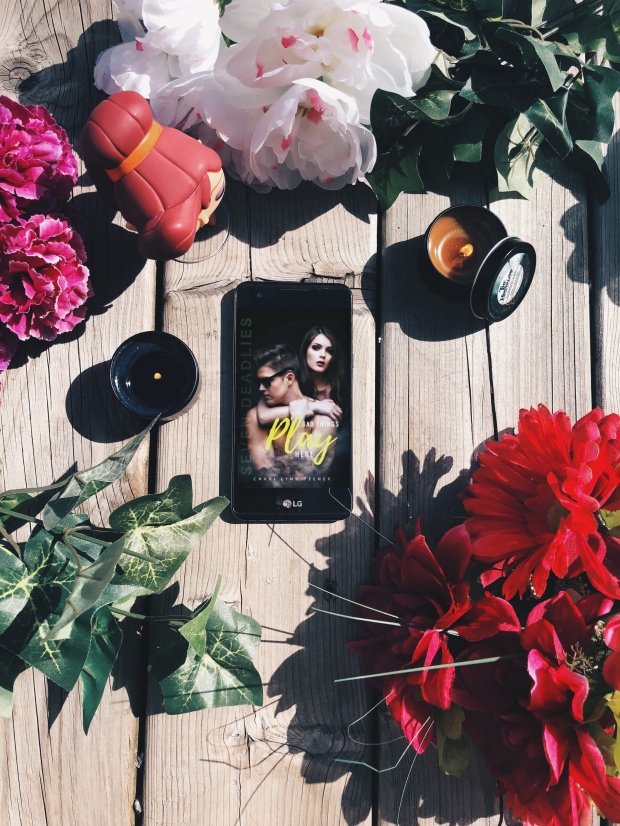 Bad Things play here by Chani Lynn Feener
Format: ebook
Self-published (June 9th, 2017)
Top 3 Genres: Paranormal Romance, Mythology, Romance
My rating: Set it on fire/If you have nothing else to read/you need to read it/Run and buy it.
Source: ARC provided by the author
To buy the book: CA • US • FR
Add to: Goodreads

Hello bookdragons! Let’s talk about a kind of book I am not often reviewing here: Paranormal romance! When I was offered to read this book, I simply couldn’t resist because it was a modern Greek mythology retelling!
Before you start reading this review please be aware it is about an adult novel with explicit sex scenes and content.

You can’t escape destiny…
Piper Anesidora hates her last name, and the Reaper and demon-infested life that comes with it. For centuries, her family has been tasked with protecting Pandora’s Box, and ensuring it’s never reopened. That’s why five years ago she ran away, hoping to build a normal life, one of her own choosing. And it worked. For a little while. But now her brother has been taken by Orpheus, a malicious soul who’s escaped from the Underworld, and if that isn’t bad enough, he’s also stolen the box. The sooner she finds her brother and stops Orpheus from unleashing hell on earth, the better. Piper wants nothing more than to return to the mundane existence she’s created for herself. That is until she’s partnered with the one guy capable of making her crave more. She’s always been told giving into sin is wrong, but her ancestors clearly never met Lust.
You can’t resist temptation…
Reece Luben takes intimate knowledge to a whole new level. As the Greek god of lust, he has a long-standing reputation to uphold as a playboy, despite the fact he’s grown bored with the game. It’s been centuries since he’s cared about someone other than his maenads, so he passes the time getting people to shed their inhibitions. As one of the few beings who can sense Pandora’s Box, Reece has no choice but to help Piper find and stop Orpheus, even though he’s avoided her family since the start of his second life. But the feisty Anesidora woman makes him feel things he’s long forgotten, and what starts out as one night giving into desire turns into another…and another. What happens when the god of lust decides he’s changing the game and playing for keeps?

Honestly, everything touching Greek mythology in this book was really good: the Pandora myth, with Piper as a descendant of the poor unlucky woman who opened a box she shouldn’t have. And now Piper’s family had to keep it safe for thousands of years. Piper was trained to protect it, and she is a skilled fighter. She is even better than that, she can channel sins! This, plus her headstrong character, made her an awesome lead to follow. I also loved the modern version of the Gods, as well as how Orpheus is the villain here. Yes, mythological characters in the 21st century… it’s pretty dangerous, and attracting! My favorite part of the story definitely 😉

Another thing with this novel: you won’t get bored. You start with a fight scene, an intense one, and you almost end with one too. In between, other fights, discoveries and a lot of sex. All kind of action hehe. We discover with Piper all that was hidden from here, and what she can really do with her powers, and her destiny. We follow her hunt for Orpheus, with as an ally no one else than the god of lust, Dyonisus (or Reece in our time). Add to that the god of Death, Maenads, and Reapers and you get yourself a hell of a party!

Ok, I knew there would be sex, and I knew it would be paranormal sex. But WHY does the penis always have to be « so big », why is the guy in erection 24/7? Ok, he is a god but still. Sometimes, it’s too much. And here, it was too much. For me at least. I wanted more, I was expecting more too. Not cliché sex scenes but great ones, as the characters were awesome already.

The mythological part was great, the characters were rocking it but the sex scenes were too cliche for me.  A nice guilty read nonetheless!