Ink, Iron, and Glass by Gwendolyn Clare
Series: Ink, Iron, and Glass
Format: Audiobook
Time: 9h54 Listen to an extract
Published by MacMillan Audio
Top 3 Genres: Young Adult, Steampunk, Fantasy
My rating: Set it on fire/If you have nothing else to read/you need to read it/Run and buy it.
Source:  MacMillan Audio in exchange for an honest review
To buy the book: Audio
Add to: Goodreads

Hello, bookdragons! Back to the audio world with Ink, Iron, and Glass! I’d heard about it for a little while and was quite curious about it, so when MacMillan audio offered it to me, I jumped on the chance to discover Gwendolyn Clare’s work!

A certain pen, a certain book, and a certain person can craft entirely new worlds through a branch of science called scriptology. Elsa comes from one such world that was written into creation, where her mother—a noted scriptologist—constantly alters and expands their reality.
But when her home is attacked and her mother kidnapped, Elsa is forced to cross into the real world and use her own scriptology gifts to find her. In an alternative Victorian Italy, Elsa finds a secret society of young scientists with a gift for mechanics, alchemy, or scriptology—and meets Leo, a gorgeous mechanist with a smart mouth and tragic past. She recruits the help of these fellow geniuses just as an assassin arrives on their doorstep.
In debut author Gwendolyn Clare’s thrilling Ink, Iron, and Glass, worlds collide as Elsa unveils a deep political conspiracy seeking to unlock the most dangerous weapon ever created—and only she can stop it. 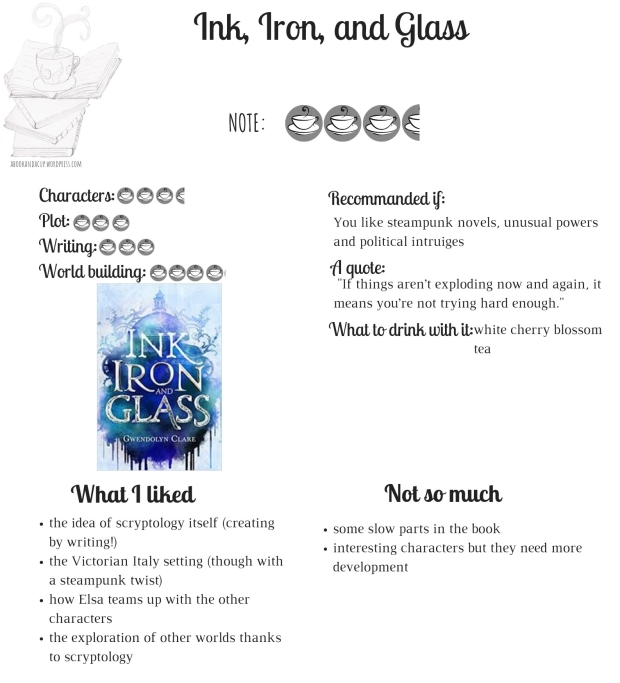 What attracted me first to this book was this idea presented by the author: that some people had the power to create worlds or change reality by writing. It is called scriptology and it’s a real field of expertise. I just think it’s a very original idea to start your story with. Opening so many possibilities if it’s well done. And it is! There are explanations for how it works, like real science, and unpredicted issues sometimes. It made it feel more realistic, as if yes, it was truly possible to bring things to reality through writing (and after all, isn’t it what all writers hope to do in a way?). Imagine, you have your notebook, and you write about this perfect reading room you hope to have, cozy and comfortable. BAM, you can make it real!
Add to that alchemy and mechanics and you obtain a mix between fantasy and steampunk that build together quite a unique novel!

For a dangerous adventure

Who says power says danger. Whenever someone can do something different, that could tip the balance in favor of one group or another, trouble follows. This is what happens to Elsa, when her mom Jumi is kidnapped right in front of her and taken away, to Earth. There starts for Elsa a race to find out who did that, and how to save her mother. On her way, she will meet new acolytes: Porzia, Leo and Faraz, all with their special talents. I really enjoyed the criticism Elsa did of life on Earth, how women were treated and underestimated for example. But also how she let go of some prejudice she had against Earthlings. Through her search for her mom, she will develop her capabilities as a scriptologist, visit other worlds and discover hidden truths. An irresistible mix!

Reading this story in the form of an audiobook really allows your imagination to work 100% on understanding how scriptology can work. I do not think that reading about it would have had the same effect. There, it was almost like receiving a lesson about it, making the concept and the idea a lot clearer. You could visualize what Elsa was writing come true. It was also interesting when it came to the action scenes, allowing me to imagine them better while focusing on what was happening. My only regret is that the book felt slooooow a bit too often.

Ink, Iron, and Glass is a great beginning for a unique series, mixing technology and more mysterious arts, so that you, reader, can imagine all that words can do!