Shadow of the Fox by Julie Kagawa
Series: Shadow of the Fox #1
Format: Hardcover
Pages: 416
Top 3 Genres: Young Adult, Fantasy, Mythology
My rating: Set it on fire/ If you have nothing else to read/ you need to read it/Run and buy it.
Source: Provided by Chapters Indigo in exchange for an honest review.
To buy the book on Chapters: here
Add to: Goodreads

Hello bookdragons! I’m really excited to share with you my last read because it was THE BOMB: I do not often read books centered in an Asian setting but every time I do, I love them. Shadow of the Fox is no exception, and I understand why it was chosen as the October Staff Pick of the Month by Chapters Indigo. I did not expect to enjoy it so much, but now, I need to tell you why!!

One thousand years ago, the great Kami Dragon was summoned to grant a single terrible wish—and the land of Iwagoto was plunged into an age of darkness and chaos.
Now, for whoever holds the Scroll of a Thousand Prayers, a new wish will be granted. A new age is about to dawn.
Raised by monks in the isolated Silent Winds temple, Yumeko has trained all her life to hide her yokai nature. Half kitsune, half human, her skill with illusion is matched only by her penchant for mischief. Until the day her home is burned to the ground, her adoptive family is brutally slain and she is forced to flee for her life with the temple’s greatest treasure—one part of the ancient scroll.
There are many who would claim the dragon’s wish for their own. Kage Tatsumi, a mysterious samurai of the Shadow Clan, is one such hunter, under orders to retrieve the scroll…at any cost. Fate brings Kage and Yumeko together. With a promise to lead him to the scroll, an uneasy alliance is formed, offering Yumeko her best hope for survival. But he seeks what she has hidden away, and her deception could ultimately tear them both apart.
With an army of demons at her heels and the unlikeliest of allies at her side, Yumeko’s secrets are more than a matter of life or death. They are the key to the fate of the world itself. 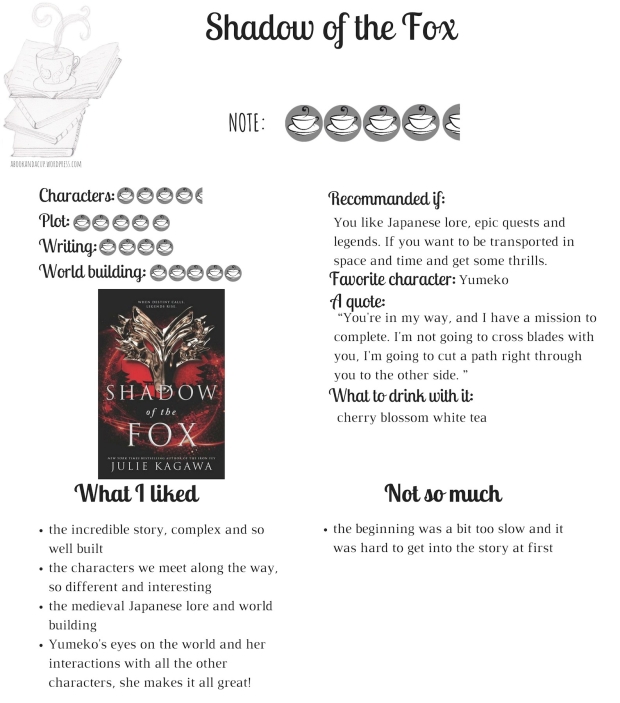 The beginning of an incredible quest…

The story of this book (and the entire series) is built around the legend of the great kami Dragon who can grant a magical wish to the human saying the right prayer. The prophecy says that soon again the Dragon will awake and so, humans are eager to find their way to him. But the prayer is not any prayer, it is written on a scroll separated in small parts, hidden to discourage evil souls to use the wish to destroy the land. We find one of our main character Yumeko, with a part of the scroll in hands, and trying to reach the temple where the second part is. At her side, a samurai, Tatsumi, who doesn’t know she has the scroll and who is looking for it too. Together, they start their travel through the fictional land of Iwagoto, strongly built around Japanese lore. And here, I thought they would slowly get to the next temple, with some adventures, yes, but we would see them arrive there by the end of the book. How wrong was I!?!?!?!? This first book was just the beginning, as our heroes encounter terrible enemies (I was terrified sometimes), but also new companions. On their way to the capital, Tatsumi and Yumeko will have to fight for their survival may times, against supernatural and human enemies. Each time, I was transported by the lore I discovered and the action kept me reading late at night. At the end of the book, a lot happened, but the quest is still long… and only beginning! It is the promise of an incredible series of books to come!

..in a fictional medieval Japan

This was for sure why I enjoyed the book so much. The building of the Iwagoto society, with clans, samurais, ronins and an Imperial family was super interesting. What made it even better was all the supernatural lores added to it: yokai (kitsune like Yumeko, ghosts, spirits of nature and many more), demons and magic. All directly inspired by Japanese old lore. The descriptions were precise and vivids and you could really feel the depth of the knowledge of the author when it came to Japanese culture and legends. I love it when an author takes the time to really bring you into their world, especially when it is so beautifully written. I can’t express how a fantastic journey it was! One warning though: this lore can be quite bloody and violent! Blood witch, vengeful revenants, murderous onis….this is not all about cute fox spirits, not at all. Be ready for some gore.

« The entire cemetery glowed with a strange, sickly green light that illuminated the dozens of bodies shambling between graves. They were naked, emaciated creatures, with stick-like limbs and bloated, distended bellies. Vaguely human, they walked hunched over or crawled through the dirt like animals, their gaping mouths showing rows of jagged, broken teeth. Gaki. »

I was not expecting it at all, but along their journey, Yumeko and Tatsumi win new companions. Very unexpected ones. But also incredibly interesting. If I had some hard time with Yumiko being too foolish at the beginning, or Tatsumi always saying « I’m nothing, I’m a weapon », their characters quickly grew more complex: Yumeko and her kindness and naive way to see the world, Tatsumi and his inside struggles. I love them dearly now, and can’t wait for what will happen to them in the next book (I’m pretty scared too, to be honest). There are not the only characters I grew fond of through the story. I won’t tell you who they are (I don’t want to spoil the surprise), but they all have very different behaviors and ways to be that make them great additions to the quest. Each brought something special, adding up perfectly to the others, and I can tell that their story will only be more and more interesting through the series!

« Did your Master Isao often compared people to monkeys?
Not usually. Mostly it was just me. »

I can see that this review is quite long (congrats if you got to the end), but there were so many incredible elements in this book! I fell in love with the fictional Japanese universe, with the characters we meet along the way, and with the adventures that are only just starting. The plot twist at the end kind of killed me too and I don’t know how I’ll wait til Soul of the Sword to be out!!! To be honest, the only thing that prevented me from giving this book a perfect rating was the beginning I found too slow. But other than that, it has everything and more one can ask for!

2 réflexions sur “An epic quest in Medieval Japan: Shadow of the Fox”