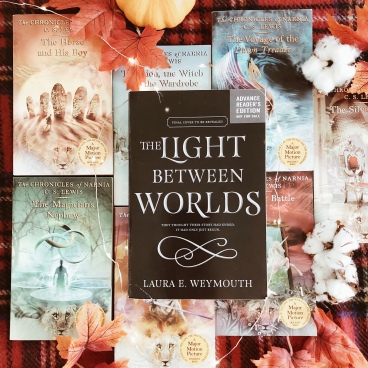 The light between worlds by Laura E Weymouth
Pages: 320
Format: ARC provided by Harper Collins Canada
Top 3 Genres: Young Adult, Historical, Fantasy
My rating: Set it on fire/ If you have nothing else to read/ you need to read it/Run and buy it.
To buy the book: CA•US• FR• Bookdep
Add to: Goodreads

Hello bookdragons!! Have you already heard about The light between worlds (I hope so, at least because of this gorgeous cover!)? If not, it is still time to go get it as it just came out!

Six years ago, sisters Evelyn and Philippa Hapwell were swept away to a strange and beautiful kingdom called the Woodlands, where they lived for years. But ever since they returned to their lives in post-WWII England, they have struggled to adjust.
Ev desperately wants to return to the Woodlands, and Philippa just wants to move on. When Ev goes missing, Philippa must confront the depth of her sister’s despair and the painful truths they’ve been running from. As the weeks unfold, Philippa wonders if Ev truly did find a way home, or if the weight of their worlds pulled her under.

When I was offered this book, I was not sure what to expect. Something full of magic, a search for a missing sister looking like a fantasy quest. But this novel was built so differently from what I thought. From the back cover, I thought it would be mostly about Philippa searching for her young sister but no. Half of the book is about Evelyn, her struggle in the real world, and her past in the Woodlands. It is only in the second half that we discover her older sister, and I was quite surprised and unbalanced by that at first. Once I stopped expecting Philippa to appear though, I was really able to get into the book and its story! It is also why I decided to divide this review into two: one part for Evelyn, one part for Philippa.

To be honest, I did not really like all the parts where Evelyn was going back through her memories and in the Woodlands. It was too much like Narnia ( I know it was advertised like that but there is Narnia-like and Narnia-like…), without the good parts of it. BUT, the parts in the present, where we were living Evelyn’s despair… these were great. It was heartbreaking to see Evelyn’s struggle, how she tried to adjust before falling back into the darkest parts of herself. The author was really good at describing depression and how it takes hold in someone. Through the pages, I was falling with Evelyn, understanding her and suffering with her. It was powerful… and to be honest, not something to read when you are feeling down!

This second part of the book was so different from the first. Philippa has a personality balancing well Evelyn’s one. She fought to have a place in the real world when returning from Woodlands, and she built a new self. She is strong and brave but also has the highest expectations for herself. I loved her character so much, just as I loved Evelyn. In this part, we learn more about the relation between the two sisters, how much it weighted Philippa to save her sister from herself for years. But despite the guilt, Philippa is trying hard to enjoy what she has and once again, she builds a new life. She was so reliable to me and a character I came to really admire!

If the magical part of the book did not work for me, I found that the author had a real talent to describe the aftermaths of a traumatic situation, depression, and loss. The life and struggles of Evelyn, as well as Philippa,  rang very true. This book was so much darker than I thought but so much more beautiful too.