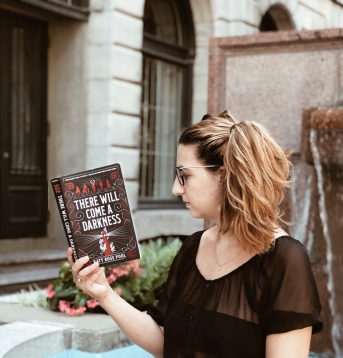 There will come a darkness by Katy Rose Pool
Series: The Age of Darkness #1
Pages: 496
Release date: Sept 3rd
Format: ARC provided by Fierce Reads
Top 3 Genres: Fantasy, Young Adult, Fiction
My rating: Set it on fire/ If you have nothing else to read/ you need to read it/Run and buy it.
To buy the book: CA • US • FR• Bookdep
Add to: Goodreads

Hey guys! Today I wanted to tell you about one of my latest read and a fantasy book that FINALLY made me feel something. I don’t know why, but I had some struggles really enjoying my latest fantasy reads… but There will come a darkness fixed that!

The Age of Darkness approaches.
Five lives stand in its way.
Who will stop it… or unleash it?
For generations, the Seven Prophets guided humanity. Using their visions of the future, they ended wars and united nations―until the day, one hundred years ago, when the Prophets disappeared.
All they left behind was one final, secret prophecy, foretelling an Age of Darkness and the birth of a new Prophet who could be the world’s salvation . . . or the cause of its destruction. As chaos takes hold, five souls are set on a collision course:
A prince exiled from his kingdom.
A ruthless killer known as the Pale Hand.
A once-faithful leader torn between his duty and his heart.
A reckless gambler with the power to find anything or anyone.
And a dying girl on the verge of giving up.
One of them―or all of them―could break the world. Will they be savior or destroyer?

Be ready to enter a new fantasy world!

Even if at first I moved slowly with this book (I just found it big haha), I very quickly noticed how fascinating and complex the world created by the author was. We have the Six Prophetic Cities, all very different, presenting different cultures (inspired by our world but different enough!) and political systems. And we have the magic, with the Graced, these people who can enhance their physical capabilities, scry, heal or build wonders. But not everybody loves the Graced, some envy them, some want to see them gone. And that is one of the points of tension in the book: one of the six Prophetic cities was invaded by the Hierophant, a man decided to exterminate all the Graced.
We navigate in the aftermath of this invasion, with one of our characters being the Prince of this city in exile. But we also meet two sisters with terrible secrets, the chief of the secret guard destined to protect the last prophet – yet to be revealed and finally, a young man with the Grace of Sight but traumatized by abused he’s been through. Each of them will play a part in our story, they will sometimes meet and spend chapters together, to be separated after. A subtle dance, with different POV through the book, but very well executed by the author.

From the first chapter, I was really captivated by Ephyra’s character, and then, when I met the others, they really felt strong and well built. Anton (Gifted of Sight) and Jude (Special Body Guard) were also really interesting and gaining in-depth through the book. Hassan (the lost Prince) had a great character arc as well, and even if you see things coming, you want to see how he’ll manage. As for Beru (one of the sisters), she was and is one of the most mysterious characters! I can’t wait to see what will happen to her (and all of them) in the second book!

It all began with the last Prophecy

Finally, if part of the action in this book rests on the Hierophant and how he is conquering the Six cities and killing Graced people, another big part is about this ancient Prophecy about an upcoming Age of Darkness. And how our different characters have roles to play in it…. even if as with any prophecy, it can be interpreted in different ways!

A fascinating and well-built fantasy world, mixing old prophecies and political tensions, plus some great characters…what else can you ask for?

PS: if you want to pre-order the book, it is currently on special on Amazon US and Canada!

3 réflexions sur “There will come a darkness: a new fantasy series to watch out for!”