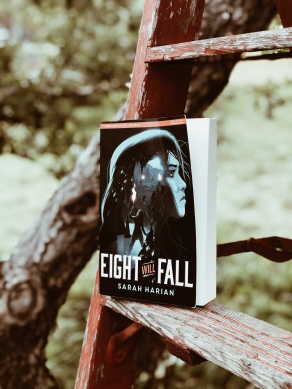 Eight will Fall by Sarah Harian
Pages: 352
Release date: November 26th
Format: ARC provided by Fierce Reads
Top 3 Genres: Fantasy, Horror, Young Adult
TW: blood, graphic violence, gore, body horror, torture
My rating: Set it on fire/ If you have nothing else to read/ you need to read it/Run and buy it.
To buy the book: CA • US • FR• Bookdep
Add to: Goodreads

Hey guys! Hope you are doing well! I’m here today to (very unfortunately) share my opinion on a book I read for Fierce Reads and that’s coming out at the end of the month: Eight will Fall by Sarah Harian! It was really a painful read for me, so I’ll try to keep this article short. My goal is not to prevent any of you to read that book, I’m sure some will like it, but I must be honest you know, as hard as it is sometimes!

In a land where magic is outlawed, eight criminals led by seventeen-year-old Larkin are sent on a mission to kill an ancient evil that plagues their kingdom. Descending into an underground realm full of unspeakable horrors, Larkin and her party must use their forbidden magic to survive what lies in wait, teeth sharp and jaws deadly.
As she fights for her life, Larkin finds a light in Amias, a fellow outlaw with a notorious past. Soon Larkin and Amias realize their fates are entwined. The eight of them were chosen for a reason.
But as the dangers multiply and her band of felons are picked off one by one, Larkin must confront a terrible truth: They were never meant to return.

Where do I start with my problems with this book? Ok, the thing that bothered me from the first pages: the main character, Larkin! She was just stupidly impulsive and so inconsistent in her attitude or even inner monologue. She changes so fast and without any reason. And she does not get better through the book. There was not one moment I liked her or she felt really interesting. I stopped at frustrating.

We only follow her point of view so it was hard to really get involved with the other characters, even if they had some interesting traits. Oh! Reminds me, in the synopsis, we have like this teasing about a spy in the group. But it is SO OBVIOUS from the beginning who that spy is like the author drops HUGE clues from the start.

The world-building itself had potential but was also disappointing in different ways. We have these people kind of isolated on an island for thousands of years, with the Surface, and the Reach, a huge huge cave. But then, the society itself, the history of the place, it is not described a lot so it’s hard to put the story or the characters in a setting. Also, how do you have characters living together on an island, with no outside influence hinted at, and then name such as Casseem, Bianca or Jacques? Makes no sense.

Finally, and this part is really a problem for me, maybe it’s not for you, but I was NOT expecting all the horror and gruesome violence. When our characters are in the Reach, it is all about bloody limbs protuberance from everywhere, blood, gore gore gore. Like the human centipede gore. I feel it would be super important to put a trigger warning on this book because honestly, it was super graphic and at points, I wanted to throw up because of what was portrayed in the book. I saw that the author added tw on her website, but I feel they should be more accessible and visible like when you look at the book in-store, you should see theme you know? like to acknowledge what you are getting yourself into and not go there blindly!

One positive thing though: the magic system. The magic comes from Empaths, who can conjure (siphoning positive emotions) and destroy (siphoning negative emotions). That was pretty original and I had never seen empath magic used like that!

Well, do I need to really? I think if you got to this point, you know what I think about this book… not for me! I will just add this: the synopsis was not representative AT ALL of what this book is!