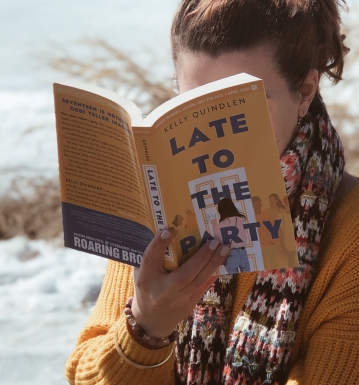 Late to the Party by Kelly Quindlen
Pages: 304
Format: ARC provided by Fierce Reads
Top 3 Genres: Contemporary, Young Adult, Romance
My rating: Set it on fire/ If you have nothing else to read/ you need to read it/Run and buy it.
To buy the book: CA • US • FR• Bookdep
Add to: Goodreads

Hey guys!! Today is the release of Late to the party by Kelly Quindlen! Perfect time to post my review about it right??

Seventeen is nothing like Codi Teller imagined.
She’s never crashed a party, never stayed out too late. She’s never even been kissed. And it’s not just because she’s gay. It’s because she and her two best friends, Maritza and JaKory, spend more time in her basement watching Netflix than engaging with the outside world.
So when Maritza and JaKory suggest crashing a party, Codi is highly skeptical. Those parties aren’t for kids like them. They’re for cool kids. Straight kids.
But then Codi stumbles upon one of those cool kids, Ricky, kissing another boy in the dark, and an unexpected friendship is formed. In return for never talking about that kiss, Ricky takes Codi under his wing and draws her into a wild summer filled with late nights, new experiences, and one really cute girl named Lydia.
The only problem? Codi never tells Maritza or JaKory about any of it.

Am I too old for parties?

It may seem like something I have said already but I think I’m too old for « light » contemporary read. I love the ones with a strong message like With the Fire on High, or Black girl unlimited but… the romance/coming of age ones are not working for me. I just found the main character, Codi, to be SO frustrating. Thinking she is the most miserable cause she is not one of teens going to parties, complaining so much about her life and taking sooooo long to finally decide to do something about it. Something that was not the smartest thing: living a double life, on one side new friends with who she learns about her adventurous side, on the other side her old friends she keeps around but feels stuck with. Of course, lies always come out!
I can understand though that the author did a good job when it comes to portraying how intense and dramatic everything is when you are a teen. No one understands you, your life is so tragic and you feel all the feels. That is true. I think it’s just something I do not want to read about haha.

Also, where are the parents in this book? Kids having parties, sneaking out and taking the car to drive to another city and they never hear a thing?!? Are they on sleeping pills or what??? This just makes this read feel unrealistic…I understand the focus on teens but you have to keep it coherent.

I’m also not sure how I feel about how the characters talked about the importance of dating someone like it was a life goal. They were competing to be the first to get to « the finish line » and the MC was so upset that her little brother, or her best friend, could date before her…. come on!

One good thing about this book though: the F/F romance. It was sweet and cute and what saved the book for me <3. Because yes, we have a lot of LGBTQ characters in this book and that’s one of the well-done aspects to me, to see them integrated and not coming out, but simply finding love!

Late to the party is perfect for the teens that will probably recognize themselves in the characters and their worries, it also displays really well queer characters and I’m all for that. As for me, at my age, I need more to still truly enjoy a YA contemporary 😉

2 réflexions sur “Late to the party: it’s a teen party!”