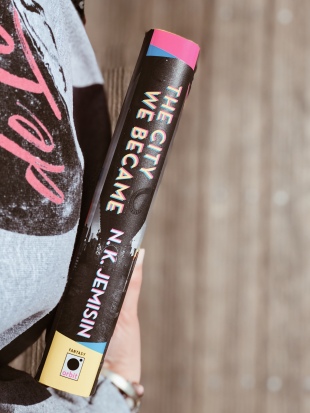 The city we became by NK Jemisin
Format: ARC provided by HBG Canada
Pages: 448
Top 3 Genres: Adult, Science-Fiction, Contemporary
My rating: Set it on fire/ If you have nothing else to read/ you need to read it/Run and buy it.
To buy the book: CA•US• FR• Bookdep
Add to: Goodreads

Hey guys!! If you are looking for something different, special, and pretty amazing to read during the quarantine, search no more: The City we became, by NK Jemisin, is here for you!

Every city has a soul. Some are as ancient as myths, and others are as new and destructive as children. New York City? She’s got five.
But every city also has a dark side. A roiling, ancient evil stirs beneath the earth, threatening to destroy the city and her five protectors unless they can come together and stop it once and for all.

Let’s talk about the concept of this book first: big cities are alive, they are born… and they can die. It takes them a long time to be born though, they have to grow and develop identities, before being able to create « avatars » through the form of a human being. New York is a big city, with many different areas, people coming from everywhere, and hoping for everything. And so, her avatars are the same: poor and successful, men and women, of all origins and sexuality.
New York is rich in her people, and it appeared in the persons it chose to represent herself. We have Manhattan, all about power and protection, but also the avatar who lost the most of himself. We have Brooklyn, a black successful woman, raised there and proud. We have the Bronx, the fighter, who knows how bad her borough can be, but also how artistically rich. We have Queens, softer but no to be trifled with. And we have Staten Island, apart and vulnerable, but also refusing to join the rest of the city. And we have the final avatar, New York as a whole, but like all newborn cities, despite a big heart, he is also very fragile…

All these people, all these parts of the city, will first realize what they are, and what they can do. As we realize it too, we learn about the beauties of New York, all it is and can be. There is some bad too yes, but a true New Yorker will accept it and love the city all the same. It was beautiful, and learning a city like that was an incredible experience! I have been once to New York, and yes, it was scary for me, and so strange. Getting to know it like that made it feel more…well human! Less scary (though don’t get me wrong, stay careful when you go to any big city haha), and so incredibly diverse!

New York being New York, when she comes to be, she already has to face danger! Not any danger, but a strange entity coming from another dimension (yeah this is where it got weird and Lovecraft-y lol). Because cities who are born are powerful, and it attracts creatures of a very different form, ready to contaminate all that can be, to kill New York avatars before they get to their full potential and the city can rise.

As someone who usually avoids alien books, it still felt weird to me to read that, but it was still very well done in presenting an « opponent » to New York, a very cunning being, ready to turn people against one another to reach their goal. I won’t tell you too much about it though, I don’t want to spoil the story, but it was a terrible enemy that New York had to face, and she may not have come out intact from her fight…

This book is a beautiful, diverse, ode to New York city: the good, the bad, and the extraordinary!

4 réflexions sur “The city we became: New York in all its g(l)ory!”