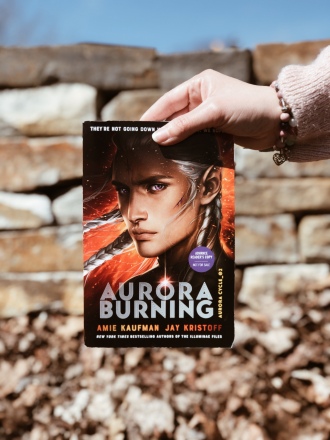 Aurora Burning by Amie Kaufman, Jay Kristoff
Series: The Aurora Cycle #3
Pages: 512
Format: ARC by Penguin Teen Canada
Top 3 Genres:Young Adult, Science-fiction, Adventure
My rating: Set it on fire/ If you have nothing else to read/ you need to read it/Run and buy it.
To buy the book: CA • US • FR• Bookdep
Add to: Goodreads

Hey guys!! Hope you are having a good weekend and are enjoying your Sunday! I’m so excited to share with you my thoughts on Aurora Burning, as it’s coming out in a few days and it was SO INTENSE!!!

First, the bad news: an ancient evil—you know, your standard consume-all-life-in-the-galaxy deal—is about to be unleashed. The good news? Squad 312 is standing by to save the day. They’ve just got to take care of a few small distractions first.
Like the clan of gremps who’d like to rearrange their favorite faces.
And the cadre of illegit GIA agents with creepy flowers where their eyes used to be, who’ll stop at nothing to get their hands on Auri.
Then there’s Kal’s long-lost sister, who’s not exactly happy to see her baby brother, and has a Syldrathi army at her back. With half the known galaxy on their tails, Squad 312 has never felt so wanted.
When they learn the Hadfield has been found, it’s time to come out of hiding. Two centuries ago, the colony ship vanished, leaving Auri as its sole survivor. Now, its black box might be what saves them. But time is short, and if Auri can’t learn to master her powers as a Trigger, the squad and all their admirers are going to be deader than the Great Ultrasaur of Abraaxis IV.
Shocking revelations, bank heists, mysterious gifts, inappropriately tight bodysuits, and an epic firefight will determine the fate of the Aurora Legion’s most unforgettable heroes—and maybe the rest of the galaxy as well.

Our heroes are back… sort of!

If you remember, we left Squad 312 in kind of a tight spot in Aurora Rising: they had discovered that an old alien form, the Ra’haam was trying to phagocyte the entire galaxy and make it a unique being. No one knows, but them. And no one would believe them. Their (our) only hope: that Aurora -the Trigger- discovers how to use the power given to her by the Eshvaren (the « good » old aliens who stopped the Ra’haam to spread their creepy flowers all over). And that will not be an easy task, especially for a team that is wanted through the galaxy and has no money. But if there is something that Squad 312 is, it’s resourceful. So they will fight and find solutions to leave a quite unwelcoming city, and discover where the Weapon created by the Eshvaren might be. Hopefully, before it’s too late for the rest of us!
The problem is, this team is also pretty unlucky. No matter how talented Scar is at charming people, or Tyler is at making plans, or Zila at calculation… it seems that our characters fall from one problem to another. And always, barely escape with their life!

From the first to the last page, this book won’t let you get bored, it is not possible. We are part of a race to save the universe, and we follow our heroes through space, against foes of all kind, until the world is set of fire (literally? you’ll see). Of course, I loved it!

Are they the hero we need?

I don’t know. But they are definitely the ones I want to read about! Amie and Jay work so well together it’s crazy! They built for us this incredible team of diverse characters, with so much humor through the pages, while we dive into the thoughts of each member of the Squad (and of course Aurora!). Honestly, there is a lot of hormones involved too, I guess that’s what happens when you put a bunch of 18 years old in a box in space haha. But it was done in such a fun way, that it was just adding to the something special this book has.
I love all of the characters, they are opening up to us even more in this book, and the alternating POV really allows us to connect with them. And yes, I’ll be honest Kal, my little space elf, is still my favorite ❤ (Scar coming a close second!).

I could write a lot more about everything I adored in this book, and it was close to perfection to me… but well, I think it’s better to let you discover it by yourself! If you have read Aurora Rising, don’t wait, get yourself Aurora Burning too! And if you haven’t read this series yet (why have you read this review and spoiled yourself???), go get it!!!