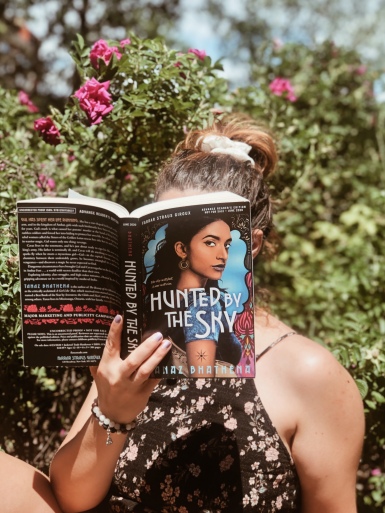 Hunted by the Sky by Tanaz Bhathena
Series: The Wrath of Ambar #1
Pages: 384
Format: ARC provided by Fierce reads
Top 3 Genres: Young adult, Fantasy, Adventure
My rating: Set it on fire/ If you have nothing else to read/you need to read it/Run and buy it.
To buy the book: CA • US • FR• Bookdep
Add to: Goodreads

Hey bookdragons! Today I’m happy to partner with Fierce Reads and Penguin Teen Canada to introduce you to a book that just came out yesterday: Hunted by the Sky! You must have seen it’s gorgeous cover around already, now is the perfect time to get to know it a bit more 😉

Gul has spent her life running. She has a star-shaped birthmark on her arm, and in the kingdom of Ambar, girls with such birthmarks have been disappearing for years. Gul’s mark is what caused her parents’ murder at the hand of King Lohar’s ruthless soldiers and forced her into hiding to protect her own life. So when a group of rebel women called the Sisters of the Golden Lotus rescue her, take her in, and train her in warrior magic, Gul wants only one thing: revenge.
Cavas lives in the tenements, and he’s just about ready to sign his life over to the king’s army. His father is terminally ill, and Cavas will do anything to save him. But sparks fly when he meets a mysterious girl–Gul–in the capital’s bazaar, and as the chemistry between them undeniably grows, he becomes entangled in a mission of vengeance–and discovers a magic he never expected to find.

The dangers of Ambar

This book is narrated through two points of view: Gul, a young girl who saw her parents being murdered and had to hide all her life because of a birthmark and an old prophecy, and Cavas, a non magi, treated like nothing in a world where magic is everything, and who works at the palace was his father is slowly dying due to the toxic environment non-magi have to live in.

We follow both character’s very different agendas, one trying to kill the king, the other trying to survive. But despite their differences, their paths will cross and intertwined, and it might be more than just luck that brought them together!

After years of being hidden, Gul indeed decided it was time for her to kill the king, and it will be Cavas -a bit against his will- who will allow her to enter the Palace as a servant, and slowly make her way closer to the king. As to if and how Gul will succeed in her plan, it will be for you to discover 😉

Interesting world-building… but some flaws in the plot

What I can tell you though is that I loved the India inspired setting, the author really portrays for us a world that will speak to all your senses, the beauty of the city, all the food descriptions, the detailed clothing, it all helps visualize this colorful and magical land where our story begins!

It was for me the best part of the book, because, unfortunately, I was a bit unsatisfied with how the rest played out; mostly, Gul was hot-headed but to a point, it was not bearable for me. She was always acting in a way to ruin her own plans, rashly, and without thinking. And a bit of that can be good, but too much is too much! The other thing I struggled with was the cascade of actions, they tended to happen a bit too fast, and sometimes without enough material and conditions to make them realistic (in the story itself). That was really problematic for me as I like coherence and consistency in my books! But if you look for something fast-paced, and don’t mind a certain lack of justification for what is happening, maybe you won’t be bothered by it as I was :p

Despite the captivating universe depicted by Tanaz  Bhathena, and all the beautiful magic universe, I could not get fully into the story due to unlikely actions and a main character that kind of was her own worst enemy. If you are looking for an Indian inspired book, with a lot of action and magic, this might be one to add to your TBR though!

PS: if you want to check the other stops of the tour and want to read more opinions on this book, here are the other accounts participating to the Penguin Teen one: